who could have thought to make / so many selves? 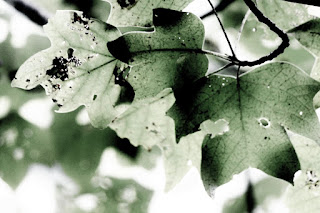 The greatest poverty is not to live
In a physical world, to feel that one's desire
Is too difficult to tell from despair. Perhaps,
After death, the non-physical people, in paradise,
Itself non-physical, may, by chance, observe
The green corn gleaming and experience
The minor of what we feel. The adventurer
In humanity has not conceived of a race
Completely physical in a physical world.
The green corn gleams and the metaphysicals
Lie sprawling in majors of the August heat,
The rotund emotions, paradise unknown.

This is the thesis scrivened in delight,
The reverberating psalm, the right chorale.

One might have thought of sight, but who could think
Of what it sees, for all the ill it sees?
Speech found the ear, for all the evil sound,
But the dark italics it could not propound,
And out of what one sees and hears and out
Of what one feels, who could have thought to make
So many selves, so many sensuous worlds,
As if the air, the mid-day air, was swarming
With the metaphysical changes that occur
Merely in living as and where we live.