The Death of Dido (some lines of Virgil) 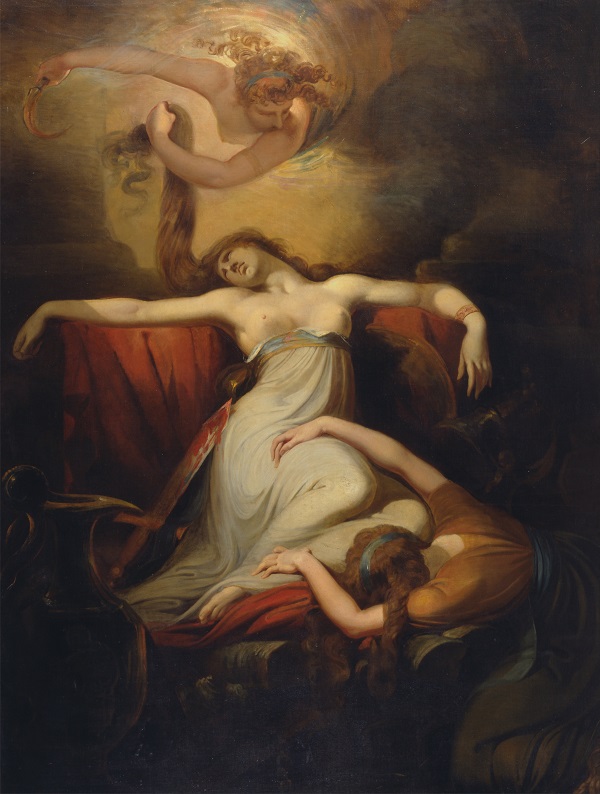 
The Death of Dido

…. she searched the sky for light, and moaned to find it.
Then mighty Juno, for pity on long pain
and a hard-dying soul, sent Iris to unbind her
from the struggle in her knotted limbs, insane
with grief, burning with grief before her hour.
And since this was no deserved or fated death,
Proserpina had not yet snipped a lock of yellow hair
nor assigned the queen to her station beneath.
Thus, dewy, saffron-winged Iris, trailing a rush
of colors opposite the sun, across the sky,
alights by Dido's head. “I will sanctify
this token to Dis and loose you from your flesh,”
she speaks, and grips and shears a tress. And here ---
warmth ebbs to nothing, life fades and thins to air.


N.B.: It's a strange little thing. I've made a sonnet where there is no sonnet in the original, nor even rhyme, but the lines seemed to sort themselves into that form naturally. Dido, queen of Carthage, abandoned by her lover, Aeneas, has thrust a dagger into her chest and is dying slowly and in agony. "Before sacrifice, a few hairs were plucked from the forehead of the victim, and as the dying were regarded as sacrifices to the nether gods, a similar custom was observed in their case" [from the Loeb edition of Virgil]. Iris is a personification of the rainbow and a messenger of the gods. Dis is an alternate name for Pluto, or Hades, god of the Underworld, and Proserpina is his queen.